The good news is that five-week-old Oakland is safe, but there’s still a lot of confusion over what led to a night of panic and worry on social media for many Canadians on Thursday.

It started when popular sportscaster Dan O’Toole, who co-hosts SC with Jay and Dan on TSN, made a cryptic Instagram post about his infant daughter early in the evening.

Being a notable TV personality with plenty of social media followers, it didn’t take long for people to notice the post and start to fear for Oakland’s safety.

Many assumed the baby had been kidnapped, while some questioned whether the sportscaster’s social media might have been hacked. 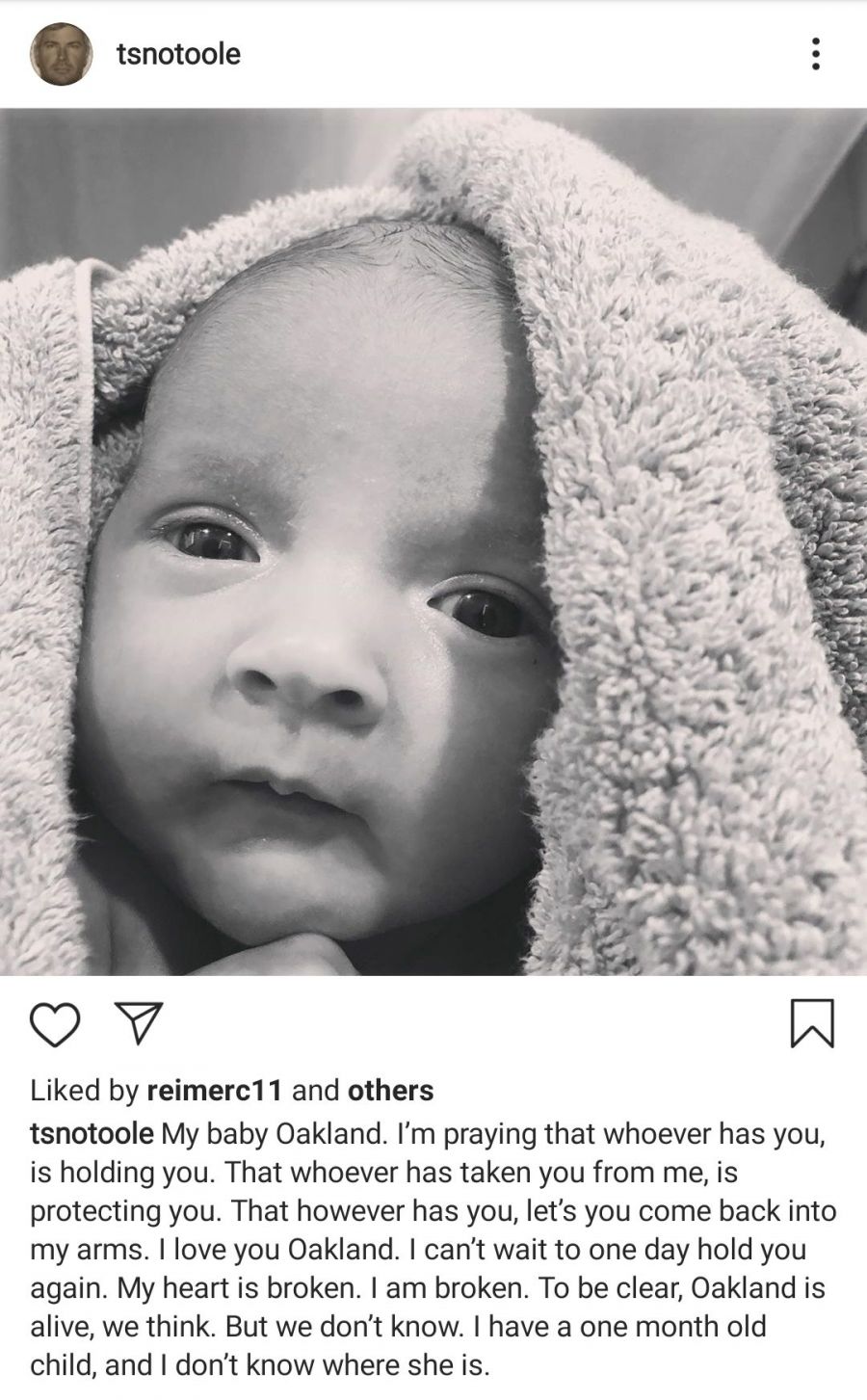 Hours passed without a peep from O’Toole, TSN or the police regarding baby Oakland, until finally there was a small edit to the Instagram caption saying that his “amazing ex-wife Corrie” had nothing to do with the situation.

At 10:30 pm EDT, Travis Dhanraj from Global News tweeted that he’d confirmed with the Durham Regional Police that Oakland had been located with her mother and was safe.

“There are no concerns for (the) child’s safety at this point.”

Just over 30 minutes later, O’Toole quote tweeted Dhanraj saying that it wasn’t a DRP matter and “should the police maybe call me first once my child has been found?” 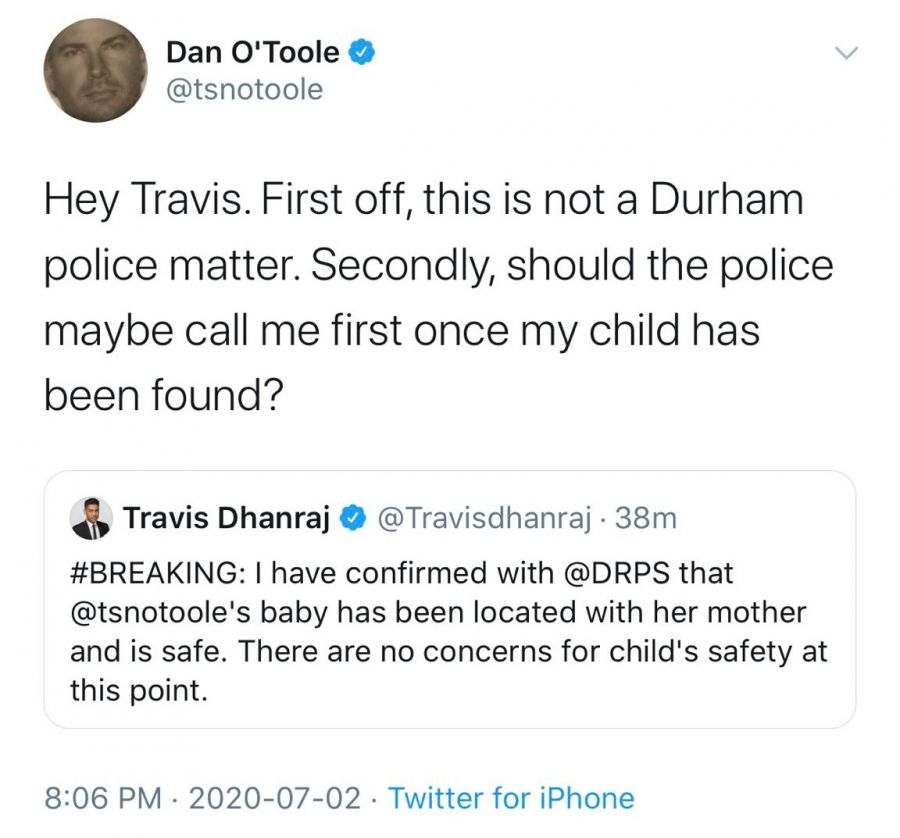 Once again, there was plenty of confusion and concern for not only Oakland, but the well being of the popular TSN personality that is beloved in Canada.

Finally, at 12:07 am EDT, O’Toole once again took to Twitter to say that Oakland “has been found and is said to be safe,” adding that police had just informed him of the fact, but he had still not seen or held her.

He then used the opportunity to address those who may have questioned the whole situation as it unfolded on Thursday night, saying that he hopes those people never have to look into the eyes of their children and tell them their sister is missing.

“I am still broken,” he added. “I don’t know if any of us will ever be fixed. We just want our Oakland back.” 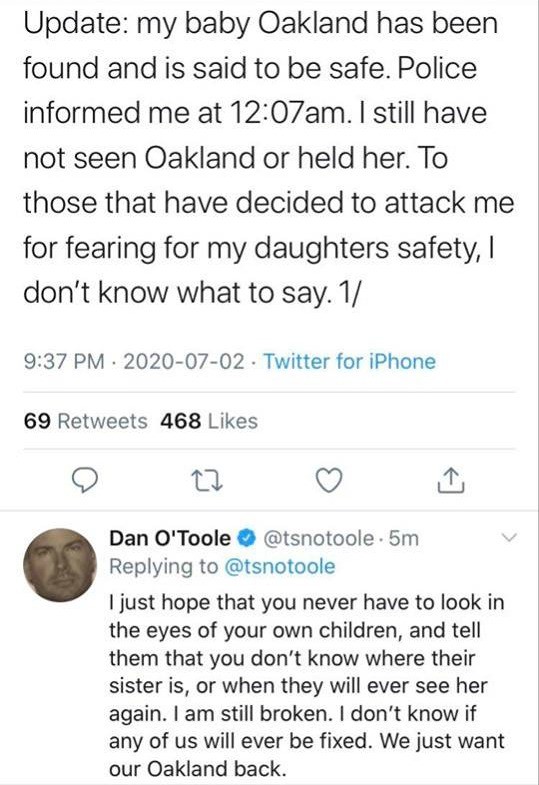 He added one more tweet of a similar nature to that this morning before deleting all of his tweets from the past 24 hours, along with the Instagram post.

Unsurprisingly, O’Toole did not appear on SC with Jay and Dan on Thursday night and Jay Onrait hosted the show alone. 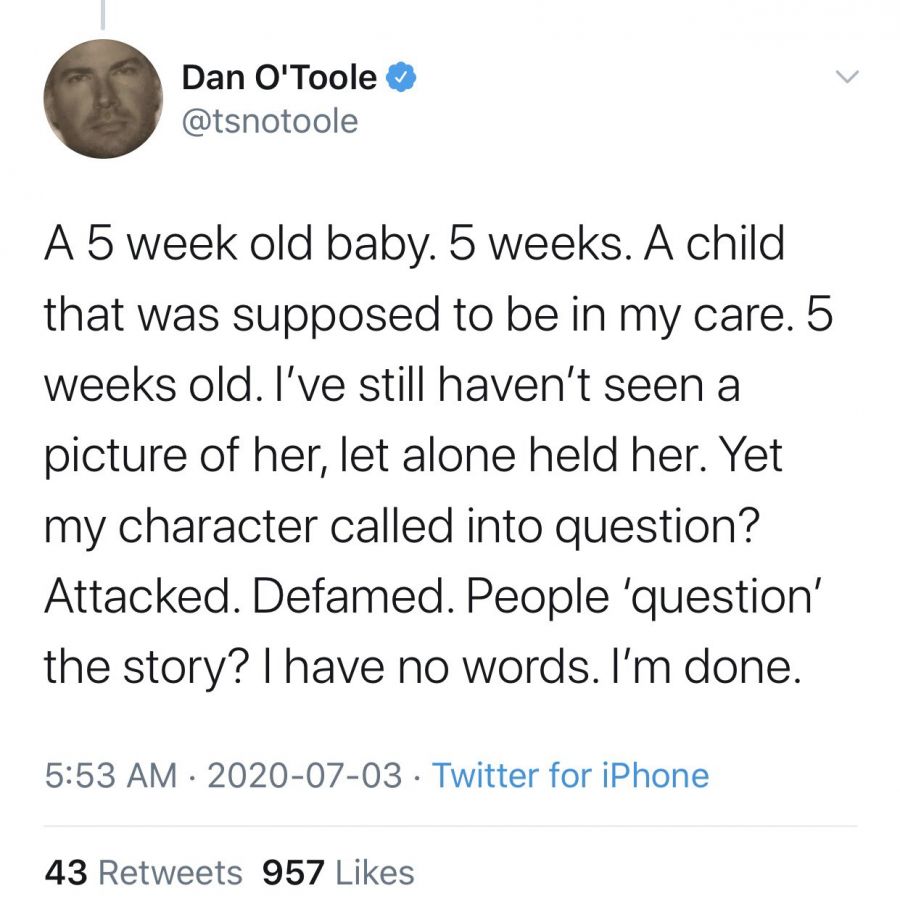