(UPDATE: June 9 @10:45 am): Jess Faulkenham, 31, has been reported found after seven days. There have been no details released on where his exact whereabouts were, but his wife, Brooke Timewell announced on facebook he is "exhausted but safe."

Timewell shared the update on social media and thanked the public for "all your love and shares that helped locate him."

Faulkenham is suspected to be driving to Penticton in a black 2020 Ford Edge with Alberta License Plate, U44950. 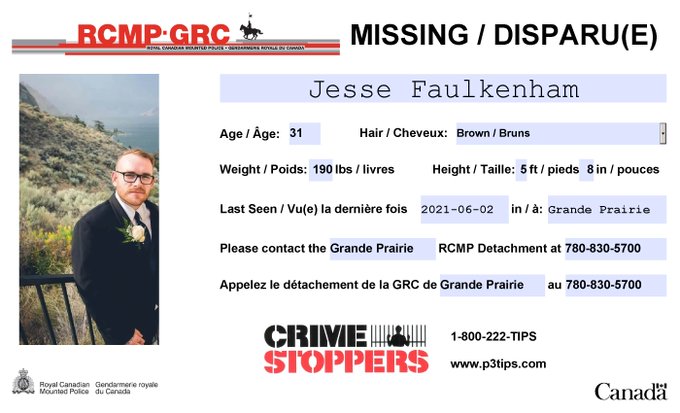 He can be described as 5’8” tall, with brown hair, and weighing 190 lbs. He was last seen wearing a full suit, a blue tie, brown crocs, and a camo hat with the words Titan on it.

His wife, Brooke, made a statement on Facebook saying Jesse "is in a state of manic psychosis and will not hold up with a conversation." She went along to say "this is not normal behaviour for him to not check in, and he was in need of immediate medical attention do not try to approach as he is in an agitated state. Just call 911."

RCMP are asking the public for any information on his whereabouts, anyone with information is being asked to contact the Grans Prairie RCMP at 780-830-5700. You can also contact Crime Stoppers at 1-800-222-8477(TIPS), or submit an anonymous tip online at www.p3tips.com.