UPDATE (8:40am): The highway has reopened in both directions.

UPDATE (8:15am): One lane is now open but eastbound lanes are still closed in the area. Expect heavy congestion near the scene.

UPDATE (7:35am): Kamloops Fire Rescue confirms that two vehicles were involved in the early morning fire on the Trans-Canada Highway. According to RCMP, the accident occurred at 5:30 a.m. at Highway 1 between Petersen Creek and the Yellowhead Highway exit.

“The worst is behind us and hopefully we can get the highway cleared and opened shortly,” said Deputy Chief Michael Adams. “It was just a fire and luckily no explosion.”

Adams says a pickup truck slammed into the back of a tanker truck, but the truck was not compromised. The pickup was the vehicle that caught fire. According to BC Ambulance Service, two people have been sent to hospital with serious injuries, but the extent of those injuries is currently unknown.

UPDATE: According to DriveBC, Highway 1 is closed in both directions from Exit 369 at Columbia Street to Exit 374, the junction with Highway 5 in Kamloops. There is no estimated time of opening. An assessment is in progress. 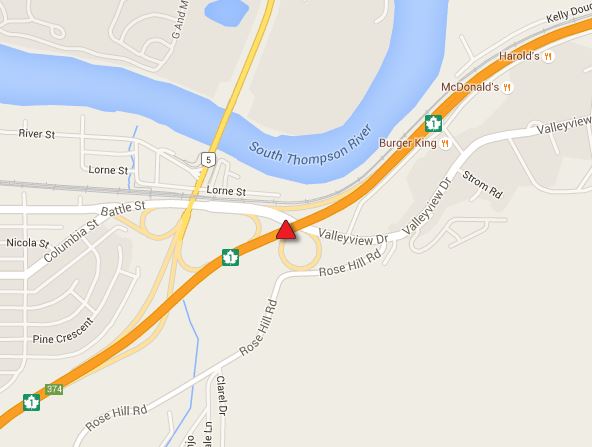 Emergency crews are on scene Friday morning for a truck fire and possible explosion near the Trans-Canada Highway interchange.

Information is still coming in regarding the accident but it appears that the highway is closed to traffic heading eastbound. Fire and RCMP are currently on scene.

DriveBC has yet to update the information. KamloopsBCNow will update readers with information as soon as it becomes available.