Dozens of anti-Trudeau protesters gathered outside of Victoria city hall as the Prime Minister arrived for a meeting with Mayor Lisa Helps and the Youth Advisory Committee on Monday. 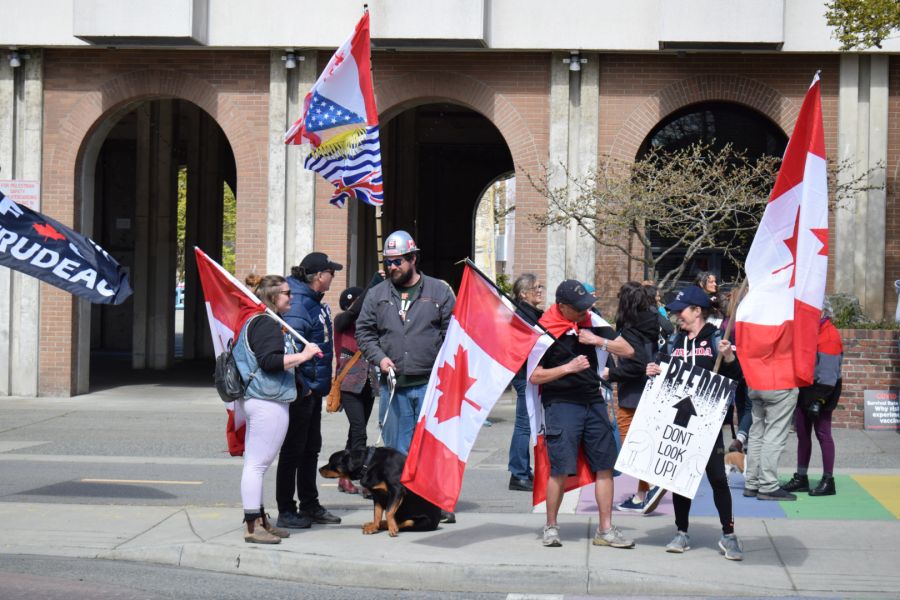 A sea of boos and jeers could be heard upon the PM’s arrival at the building as protesters expressed their displeasure with Trudeau’s political and COVID-related policies.

A common theme among many of the demonstrators was the claim that the Canadian government and Prime Minister Trudeau had violated their personal freedoms with vaccine mandates and similar policies:

“We need Canadians to come together,” said Bob Martin, one of the demonstrators. “They can talk about whatever they want, that’s politics. Good or bad for people, it doesn’t matter, it’s gone on since the beginning of time…We are not political, we are making a statement for justice, freedom, choice and kindness.”

Mayor Lisa Helps and PM @JustinTrudeau met with members of @VicYouthCouncil today to discuss climate action and ways to build a bright future for young people in Victoria. pic.twitter.com/ZNaAWsf3HQ

Another protester expressed a similar sentiment:

“I’m here with fellow Canadians trying to show love,” said Sheri, who once voted for Trudeau in the 2015 election. “That’s why we’re here, we have worked hard all of our lives…I would ask him [Prime Minister Trudeau] why he wants Canada to be like China?…why does he want Canadians to live that way? We all should be free.”

There were also a number of counter-protesters in attendance, many of which expressed their support to the PM and his government:

“I’m here to support Prime Minister and Mayor Helps,” said Jim Shortree. “The protesters are lucky to be here and able to protest…Many of the protesters here have signs that read ‘F Trudeau’ [sic], which to me means they don’t like Trudeau, which is their right, their freedom...but I don't think they’re making much headway holding those kinds of signs.”

There were also those who occupied a middle ground between the two opposing views:

“I think it’s important to uphold democracy,” said one woman. “And to do that you need to show the people in power how the regular people feel…I’m not anti anything, I’m pro democracy, i’m pro open and honest debates. I want to see the goodness and beauty that is Canada come back and have that shown through our leadership. It’s the duty of the leader of a country to unite and not tear people apart.”

Everywhere we go, we hear from young people that they want ambitious climate action. They deserve that – and with #Budget2022 and our Emissions Reduction Plan, we’re delivering that. That’s what Mayor Lisa Helps, the @VicYouthCouncil, and I spoke about today. pic.twitter.com/U1WbRtjnyp

The boos and jeers returned as the Prime Minister exited the building following the conclusion of the meeting, however it overall remained a peaceful demonstration throughout.