(UPDATE: July 26 @ 12 pm) - An evacuation order in Sicamous has been partially rescinded.

The Columbia Shuswap Regional District (CSRD) said this morning that the properties lifted out of the order are now on alert instead.

The areas affected are:

CSRD said the change came into effect at 10 am. 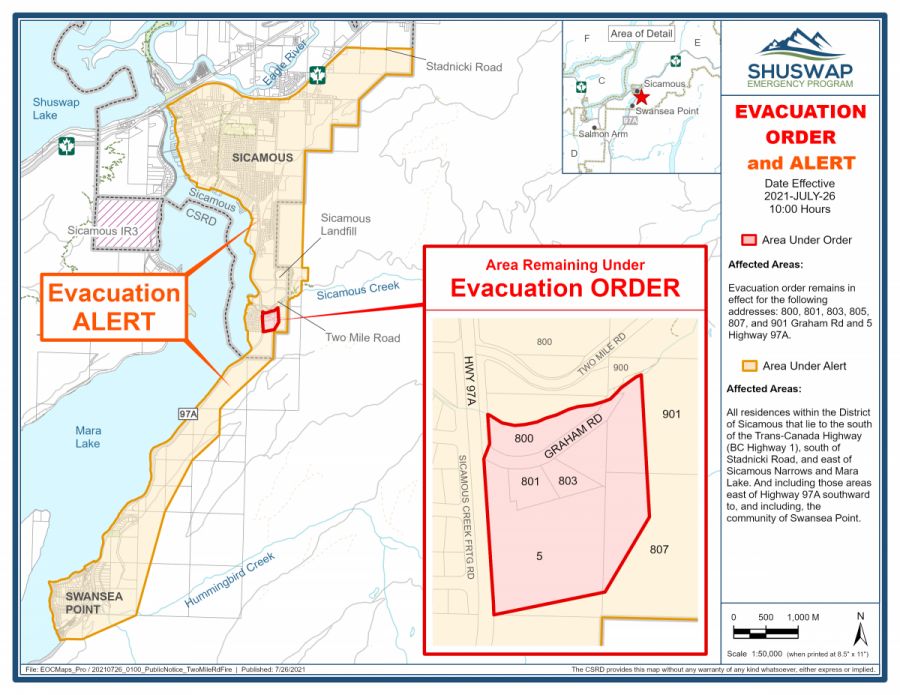 The evacuation order, however, remains in effect for the following addresses:

Residents of those addresses cannot return home at this time, the regional district explained.

It added: "All homes in the rescind area revert to evacuation alert status and residents must remain ready to leave their homes again on short notice."

BC Wildfire Service, meanwhile, still lists the fire as 1,000 hectares in size.

It remains out of control and its cause has yet to be determined.

In its last update, BCWS said it had 32 firefighters, three helicopters and 10 pieces of heavy equipment dealing with the fire.

(UPDATE: July 24 @ 5 pm) - Crews continue to battle a wildfire in the Sicamous area on Saturday.

According to the BCWS, the Two Mile Road blaze now sits at 1,000 hectares in size. It is still classified as out of control.

Evacuation orders remain in effect for the area. This blaze was caused by humans.

A total of 32 firefighters, three helicopter and 10 pieces of heavy equipment are on scene today.

(UPDATE: July 23 @ 10:45 am) - More growth has been mapped on the Two Mile Road wildfire, which is burning just south of Sicamous.

The BC Wildfire Service says that part of the updated size is due to more accurate mapping, but the fire has also seen a bit of growth as well.

Fortunately, it's been moving away from Sicamous and "crews are making good progress holding the guard with assistance from industry." 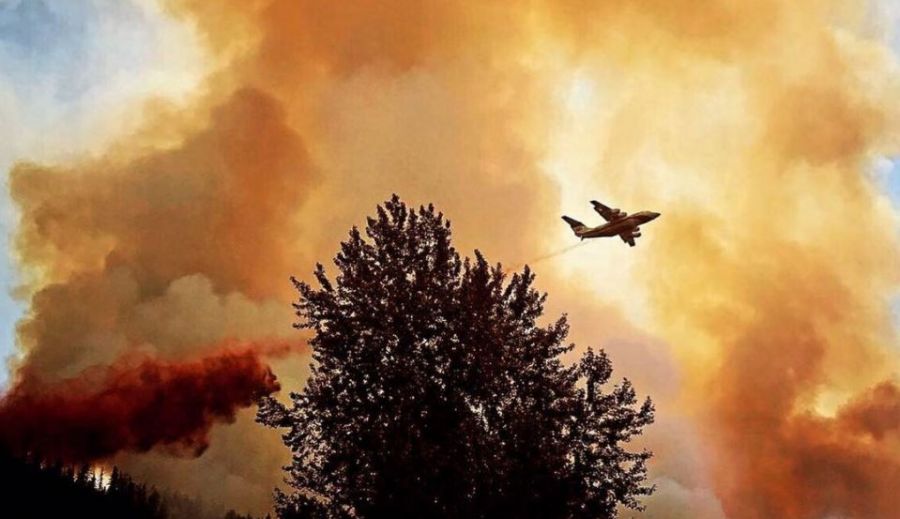 Evacuation orders remains in place for a number of properties within the District of Sicamous on the east and northeast sides of Mara Lake.

Other Sicamous properties on the south side of the Trans-Canada Highway are under an evacuation alert at this time.

You can learn more about those orders and alerts on the Columbia Shuswap Regional District website.

At this time, 33 BCWS firefighters, 10 pieces of heavy equipment and three helicopters are assigned to the fire to assist local fire departments.

BC Wildfire Service said in an update last night that the growth is due both to better mapping and spreading fire.

It remains out of control.

BCWS said: "Growth today was in a direction away from Sicamous and crews are making good progress holding the guard at the lower end of the fire despite gusts up to 35 kilometres per hour." 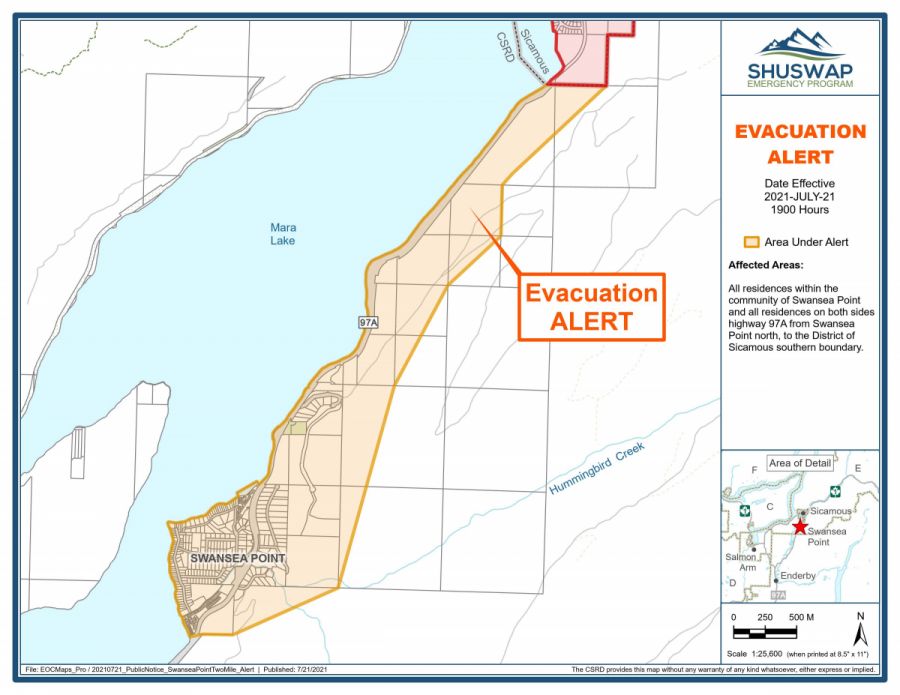 The community on both sides of Hwy 97A north to Sicamous is under alert.

CSRD said it was issued "due to the potential danger to life, health or property."

For more evacuation information related to the fire, head here.

The cause of the fire remains under investigation.

BCWS said it had four firefighters and 10 pieces of heavy equipment in its update last night.

(UPDATE: July 21 @ 3:30 pm) - The latest mapping from the BC Wildfire Service estimates the Two Mile Road wildfire, just south of Sicamous and east of Mara Lake, to be 400 hectares in size.

"The updated size is due to better mapping as well as growth on the fire," explained the BCWS.

Despite the growth, the District of Sicamous said earlier today that the fire is moving northeast and upslope, away from the municipality.

As a result, there have been no changes to the current evacuation alerts and orders issued by the Columbia Shuswap Regional District.

The BCWS currently has 36 firefighters assigned to the blaze, who are being aided by a pair of helicopters and 10 pieces of heavy equipment.

It remains out of control and its cause is still being investigated.

Homes nearest the fire were the subject of a tactical evacuation last night, the agency said.

BCWS added that there are 33 firefighters, 10 pieces of heavy equipment and support from local fire departments at the site this morning.

(UPDATE: July 21 @ 5:45 am) - Around 1,000 residents have been successfully evacuated from the Sicamous area as the Two Mile Road fire continues to burn.

The Columbia Shuswap Regional District (CSRD) said a reception centre has been set up at the Sicamous Seniors Centre at 1091 Shuswap Ave.

CSRD said the BC Wildfire Service (BCWS) was "actively and aggressively" fighting the blaze last night, with the assistance of local firefighters. 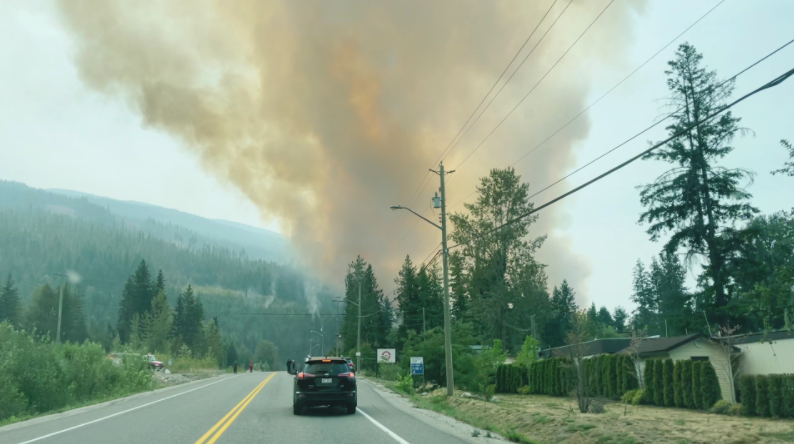 Clients and residents were helped out of the Eagle Valley Manor by support staff.

They were taken to neighbouring communities, Interior Health explained.

The Sicamous Health Centre has been evacuated and will remain closed until further notice, the health body added.

It also said that the COVID-19 vaccination clinic in Sicamous has been cancelled.

"We are working closely with municipalities, regional districts, and the BC Wildfire Service to ensure precautions are underway to protect patients, clients, and residents," Interior Health added.

In its most recent update late last night, BCWS said the fire remains at 60 hectares.

It's still out of control and no cause has yet been officially determined.

The agency said it had 16 firefighters, five helicopters and assistance from local firefighters last night.

(UPDATE: July 20 @ 3:45 pm) - The wildfire burning just south of Sicamous along the east side of Mara Lake has grown to 60 hectares.

As a result, the Columbia Shuswap Regional District has extended the evacuation order north and it has now creeped into the municipality.

According to the CSRD, it affects "all residences within the District of Sicamous that lie to the south of the terminus of Sherlock Road, southeast of Cook Avenue, Gillis Avenue, Larch Avenue, east of Sicamous Narrows and Mara Lake and north of Sicamous Creek.

The rest of Sicamous that's south of the Trans-Canada Highway remains under an evacuation alert at this time.

BC Wildfire Service, District of Sicamous, Malakwa and Swansea Point firefighters continue to action the fire and the CSRD says crews "are making some progress."

The fire is suspected to be human-caused, supporting earlier reports that it was sparked by a crash along Hwy 97A shortly before 11 am.

Hwy 97A remains closed in both directions

(UPDATE: July 20 @ 2:05 pm) - The Columbia Shuswap Regional District has issued an evacuation alert for nearly the entire District of Sicamous in response to a new wildfire on the east side of Mara Lake.

Tactical evacuations were already underway for properties nearest to the fire, but now a widespread evacuation alert is in place.

It affects all District of Sicamous properties south of the Trans-Canada Highway (Hwy 1), up to the eastern and western boundaries of Sicamous.

The CSRD said the wildfire, which is burning in the area of Two Mile Creek near the old Waterway Houseboat dock, "may pose a danger to people and property." 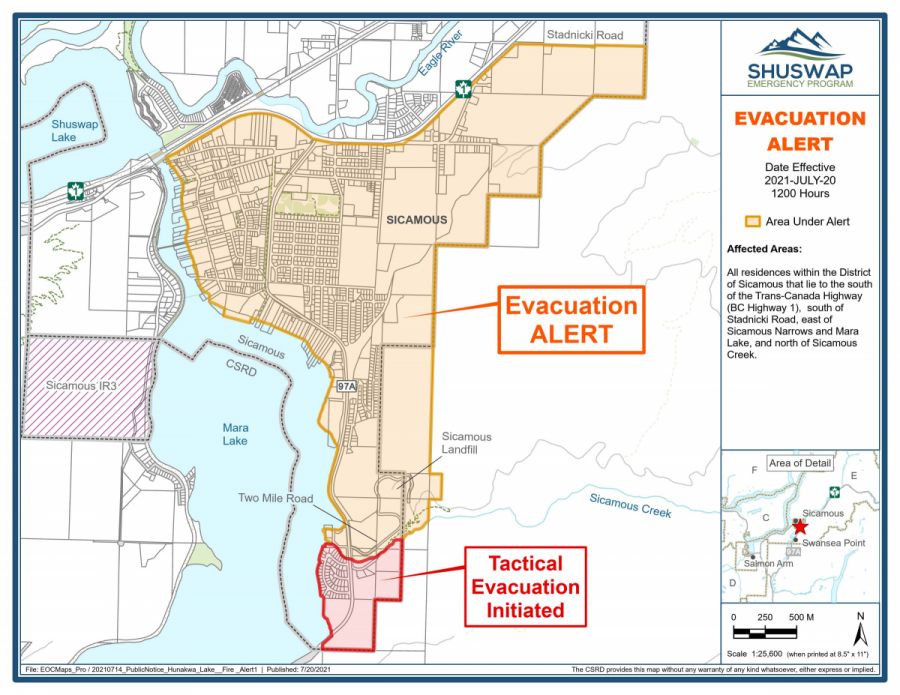 (UPDATE: July 20 @ 12:40 pm) - The BC Wildfire Service has confirmed to NowMedia that it is assisting local fire departments with a new wildfire burning two kilometres southeast of Sicamous.

Six BCWS ground personnel and "multiple helicopters" have been assigned to the fire at this time.

It's currently estimated at 10 hectares in size and is burning out of control on the east side of Mara Lake, directly above Hwy 97A.

The highway remains closed at this time, although DriveBC cites a "vehicle incident" as the reason for the closure.

Witnesses in the area have reported that the single-vehicle crash that closed the highway is what sparked the fire, but that has not been officially confirmed.

Aircraft will be using nearby water sources to aid their suppression efforts and the BCWS is asking people to remain clear of the area.

RCMP boats are already on Mara Lake ushering boaters away from the scene.

NowMedia will continue to update this story as more information becomes available.

(Original story: July 20 @ 12:05 pm) - Crews are responding to a new wildfire that has sparked on the east side of Mara Lake, just south of Sicamous.

The fire ignited around 11 am and is already exhibiting aggressive tendencies, witnesses have said.

“The Sicamous and Swansea Point Fire Departments are on scene and are assessing the fire in conjunction with the BC Wildfire Service,” explained a tweet from the Shuswap Emergency Program.

The Columbia Shuswap Regional District said a tactical evacuation of homes nearest to the fire is underway, while the nearby Sicamous Landfill is closed until further notice.

DriveBC has now confirmed that Hwy 97A is closed in both directions in that area, but cited a "vehicle incident" as the reason.

There are claims that the single-vehicle accident in the same area sparked this new fire, but those reports have not yet been confirmed.

NowMedia has contacted the BCWS and is waiting on more details about this new event.

We will continue to update this story as more information becomes available.