(UPDATE: July 28 @ 9:30 am) – The Tremont Creek wildfire's estimated size has increased once again.

"The size increase is inclusive of the last two days of growth," BCWS explained.

"Due to intense fire behaviour, continued growth will most likely occur."

BCWS also warned that the fire "continues to be extremely active" in the southeast and "will most likely continue to increase in size." 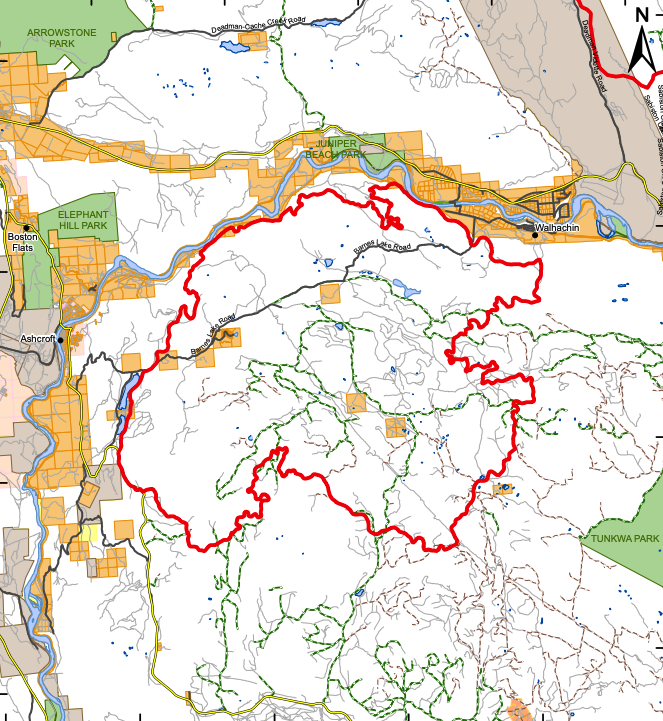 The agency added: "The northern flank of the fire from Barnes Lake to Walhachin has very minimal to no observed fire activity. The southwest corner near Barnes Lake and Highway 97C was a priority objective yesterday, with crews finishing the remaining planned ignition between the guard and the fire.

"Crews are working with heavy equipment and helicopters to build machine guard around the areas of growth in the southern flank to limit further growth."

The fire remains out of control and its cause has still not been determined.

In its most recent update – which was released this morning – BCWS said it had 52 firefighters working on the blaze.

They are being supported by eight helicopters and 32 pieces of heavy equipment.

(UPDATE: July 27 @ 7:30 am) – An evacuation alert and order related to the Tremont Creek wildfire have been downgraded.

The Thompson-Nicola Regional District (TNRD) said an evacuation order is being downgraded to an alert for the following 60 properties in Walhachin:

Meanwhile, an alert as been rescinded for the following 173 properties in Thompson River Estates and Semlin Valley:

To see a map showing all the evacuation information put out by the district, head here.

The BC Wildfire Service said this morning the fire is still estimated to be 12,061 hectares in size.

The agency said 60 firefighters, seven helicopters and 34 pieces of heavy equipment are battling the blaze.

It added: "Eight structure protection personnel are working a night shift to provide 24/7 assistance on the fire."

The fire remains out of control. Its cause is still being investigated.

BCWS has warned the fire may cause further disruption to Hwy 97C.

Yesterday, BCWS reported that a two hectare spot fire had jumped Highway 97C on the southwest flank of the fire.

Crews responded quickly and contained the hot spot around 1:30 am.

The main fire has not crossed the highway and crews will continue to mop up the spot fire today.

Crews will continue to “connect machine guard around this growth and connect it to the existing guard.”

There are currently 60 firefighters, seven helicopters, 34 pieces of heavy equipment fighting this blaze. 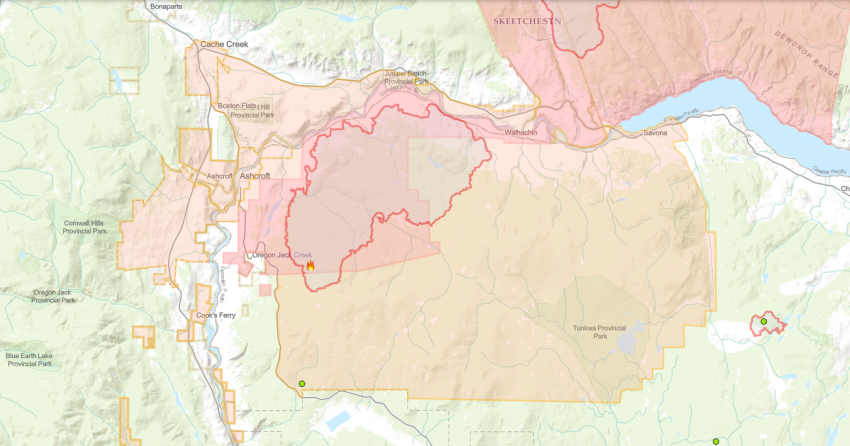 There are also eight structure protection personnel working a night shift to monitor fire activity as much as possible.

Evacuation alerts for the Ashcroft Indian band and the Village of Ashcroft remain in place.

According to the BCWS, the blaze is now at 12,061 hectares in size. It is still classified as out of control.

"Wildfire activity continues to be expected to increase in the afternoons in some sections of the fire as hot and dry conditions persist, as well as strong afternoon winds."

With winds continuing to lessen, the BCWS doesn't expect major growth throughout the day.

"Today, crews are continuing to patrol for hotspots and working on the excursion on the southwest corner of the fire. Crews will be supported by aerial resources and heavy equipment to build control lines around the excursion."

"Small scale hand ignitions will be utilized to remove fuel between control lines and the fire perimeter."

These operations were supported by helicopter bucketing and a retardant tanker truck. 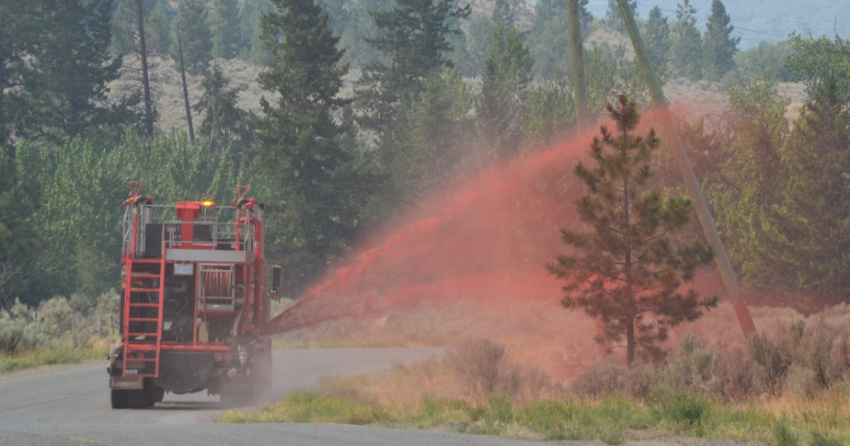 Crews continue to work with local ranchers to contain a run in the northeast corner while building a second contingency line and mopping up hotspots.

“Sprinkler activation has been very successful at keeping the fire out of community areas.” 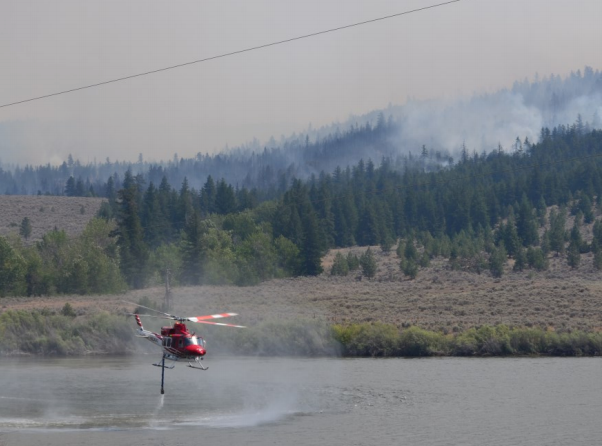 There are 44 firefighters, eight helicopters and 32 pieces of heavy equipment fighting this fire.

Evacuation alerts for the Ashcroft Indian band and the Village of Ashcroft remain in place. 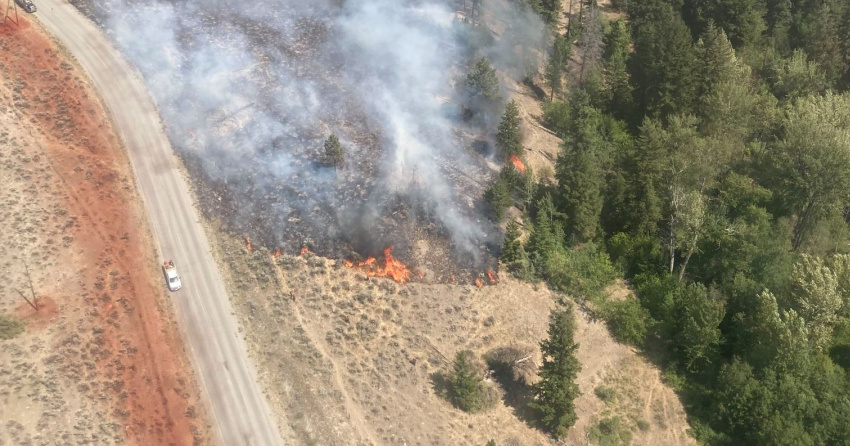 (UPDATE: July 22 @ 11:00am): The Tremont Creek wildfire saw significant growth due to afternoon winds yesterday, but an updated estimate on size can't be provided until smoke has lifted and visibility improves. As of now it still remains at an estimated 10,916 hectares.

BC Wildfire Services confirmed that due to the strong winds in the area, they've had to pull back multiple times over the past few days for safety purposes.

Crews were able to conduct aerial and small scale hand ignitions yesterday along the Barnes Lake Road, beginning at the start of Studhorse Road down to Barnes Lake.

Unburnt fuel in this area was burnt to prevent spotting caused by the increased afternoon winds. These planned ignitions were further supported by helicopters providing bucketing support as well as a retardant tanker truck.

There are currently 42 firefighters on scene, working alongside eight helicopters and 27 pieces of heavy equipment, these resources are being shared between the Lytton Creek Complex.

The Ashcroft Fire Department overnighted the incident, and has been working to wet down tie piles. Structure protection was being put up in areas around the tie yard where the fire is anticipated to move down to.

CP Rail has also brought in a hazmat and emergency response officer to assess and secure the rail yard.

Today a line locator and heavy machinery will work to reinforce a guard on the east flank throughout the day and personnel will also be assessing the Guichon FSR for new guard lines, and to start moving equipment to this area.

As of tonight the Sparks Lake team will be taking over the Tremont Creek wildfire.

An evacuation alert remains in place for the Ashcroft Indian Band and the Village of Ashcroft as a precautionary measure.

NowMedia will continue to update the story as information is provided.

The BC Wildfire Service now estimates the fire, located around 8.5 kilometres southeast of Ashcroft, to be 10,916 hectares and still out of control.

"Due to the persistent hot and dry conditions combined with strong winds on site, fire activity (has) increased," said the BCWS.

"Winds were estimated to be gusting up to 60 kilometers an hour, which lead to increased fire behavior and subsequent increase in rate of spread for this fire." 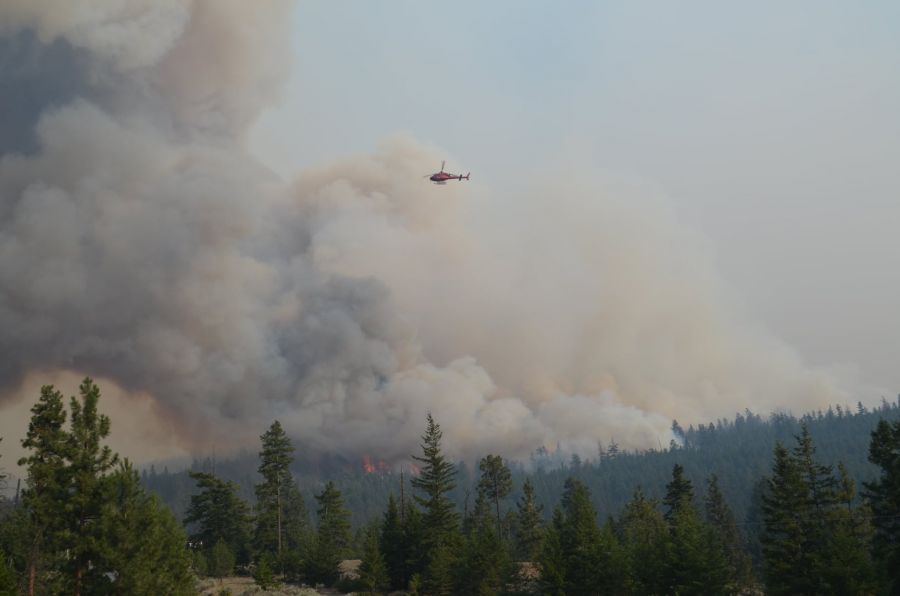 As a result, BCWS personnel, structure protection teams and heavy equipment had to conduct a tactical withdrawal from the fire and pull back to safety on Sunday.

Crews were able to return to the front line on Monday and patrol the area overnight as they prepare for a difficult week thanks to the expected hot, dry and windy conditions.

The BCWS currently has 43 firefighters, 20 pieces of heavy equipment and six helicopters assigned to this fire.

The Thompson-Nicola Regional District has both evacuation orders and alerts in place as well, which you can learn more about here.

Yesterday, the BC Wildfire Service (BCWS) implemented an Area Restriction Order around the fire.

Read about the order here.

"The size of the Area Restriction reflects the continued need to protect the public in areas where there are ongoing fire suppression activities," BCWS explained.

Read about evacuation orders and alerts related to this fire here. 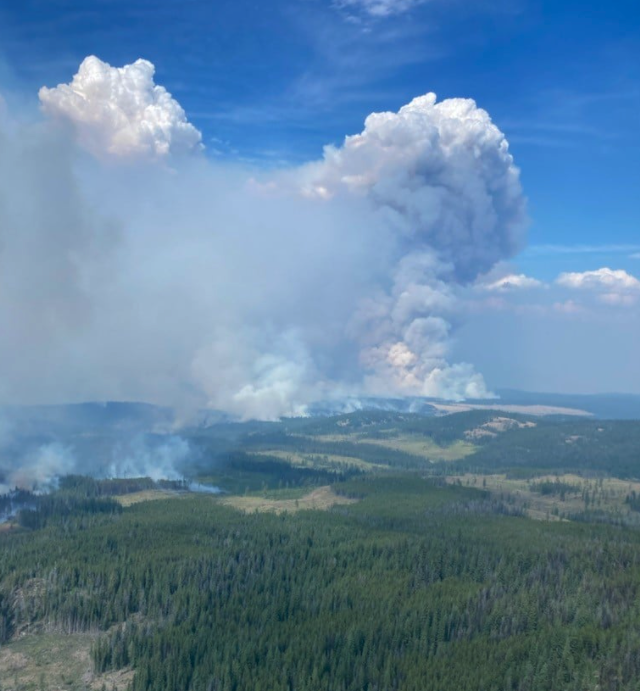 The fire remains out of control and its cause remains under investigation.

Crews had previously been forced to pull back equipment due to the increase in fire activity.

The fire is now part of the Lytton Creek Complex fire.

In its latest update, BCWS said it was devoting 40 firefighters, five helicopters and seven pieces of heavy equipment to the blaze.

(UPDATE: July 16 @ 9:45 am): The BC Wildfire Service has provided an updated size estimate on the Tremont Creek wildfire.

The fire, burning around 8.5 kilometres southeast of Ashcroft, is now mapped at 2,120 hectares.

"Hot and dry conditions in combination with strong winds continue to influence fire activity on site," says the BCWS website.

"Yesterday afternoon when winds increased the subsequent increase in fire behaviour resulted in the heavy equipment being pulled back for safety."

Evacuation orders and alerts remain in place, which you can learn more about here.

BC Wildfire Service (BCWS) officials said it remains out of control, however.

An evacuation alert for 50 properties in Electoral Area "I" near Barnes Lake has been upgraded to an order. 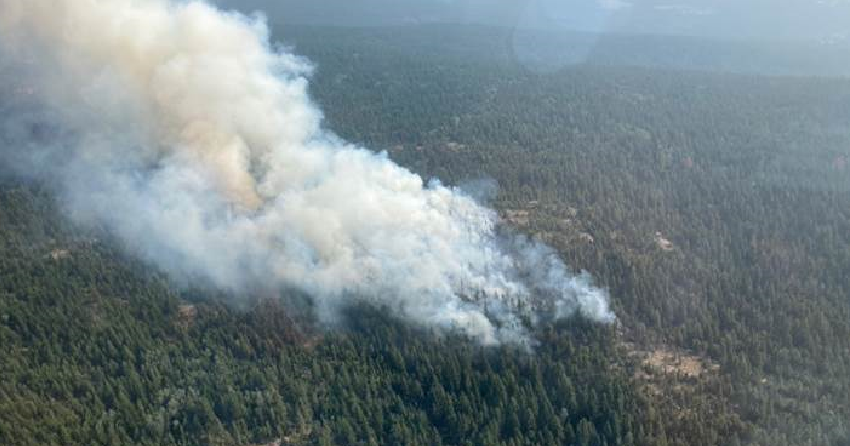 In its latest update, the BCWS said conditions remained hot and dry.

Firefighters have been forced to pull back heavy equipment due to the danger presented by the wind.

The cause of the fire remains under investigation.

According to the latest update, there are 23 firefighters and one helicopter battling the fire.

Resources are being shared between all fires in the Lytton Complex, however.

The estimated size of the Tremont Creek is 780 hectares, and it’s approximately eight kilometers southeast of Ashcroft.

BC Wildfire Services has confirmed that the fire has issued an evacuation alert for the Village of Ashcroft and the boundaries surrounding Cache Creek.

#Evacuation ALERT issued for all properties within the boundaries of the Village of Cache Creek. #CacheCreekBC #BCwildfire pic.twitter.com/gelyVq8i0O

The Thompson-Nicola Regional District has also issued an Evacuation Alert for 50 properties in Electoral Area "I" in Blue Sky Country near Barnes Lake.

The cause of the fire is still under an investigation, and is currently classified as out of control. 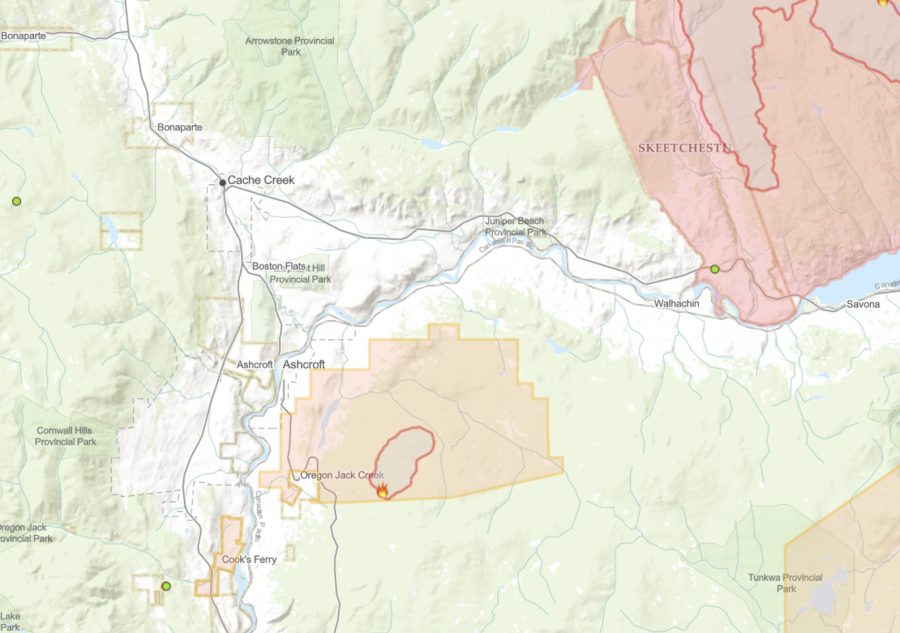 Heavy equipment and structure protection teams are on site, and other resources are being shared between the Lytton complex.

NowMedia will provide updates as they are provided.