The Assembly of First Nation’s annual meeting boiled over with accusations of corruption, a climate of toxicity and bullying in a crisis that the national chief says is a great opportunity for the organization to begin to heal.

The chiefs approved a resolution Thursday that says a “serious problem exists” within the AFN that is causing reputational harm to the organization that reflects the voice of chiefs-in-assembly.

The resolution calls for a forensic review of its finances dating back at least a decade; a "third-party investigation into the climate of toxicity, bullying and lateral violence at the AFN"; and for the national chief and the AFN executive committee to come together to heal their relationships.

National Chief RoseAnne Archibald said the turmoil over the last three days at the gathering is a necessary part of healing. 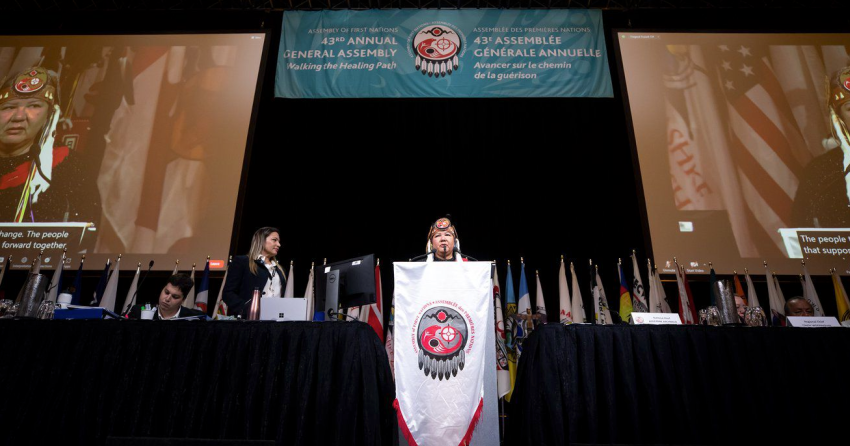 "This crisis is actually a great opportunity. We have seized this great opportunity to clean up the AFN to begin to heal it to move forward in a good way. That's what has been created by all of this, so I think that that's what we need to focus on," she told the media after the vote.

The dissension became public in mid-June when the assembly executive suspended Archibald while it launched an investigation into four complaints against her by her staff.

Archibald claimed she was suspended for trying to investigate corruption within the organization and called for the forensic audit.

Chiefs voted to reinstate her on Tuesday and a vote of non-confidence in Archibald's leadership was withdrawn from the assembly without a vote on Wednesday.

Archibald said she gave the chiefs certain information that convinced them it needs to be examined. Staff payouts and contracts issued by the AFN are her key concerns, she said.

“The truth is like a lion. You don't have to defend it. You set it free, and it will defend itself. This has always been about truth.”

Before Thursday's approval of the audit, some chiefs voiced concerns about the cost of the financial review, while others called it a necessary process to "establish truth."

Chief Lance Haymond of Kebaowek First Nation in Quebec was the seconder on the resolution. He said the time had come for a new governance model for the assembly to connect with its people.

"It's great that you know we've used this model for 40 years, but it's broken," he said. "Let's do the work. Let's get the answers that the chiefs are asking for, and let's work towards a more renewed and better AFN that really responds to the realities that we have to live today."

Okanagan Indian Band Chief Byron Louis told delegates that the audit and other measures approved in the resolution will allow for a process that provides proof.

"When you make accusations about corruption, gender bias, you know, nepotism and all these, you're levelling that accusation against us because we are the assembly and that is something that needs to be very clear."

Following the vote, Serpent River First Nation Chief Brent Bisaillon approached the microphone and voiced his disappointment "with the actions of the assembly" and announced he would be leaving the meeting early.

“This is not leadership. This is not what our people expect of us as leaders," he said.

"Our youth have called out this assembly for inaction, and the last few days have been mired in drama and ego."

Rosalie LaBillois, AFN's youth council co-chair, said Wednesday that politics and disagreements around leadership at the gathering got in the way of Indigenous topics that matter most.

The assembly, whose theme this year was “walking the healing path," began Tuesday, a day after the AFN announced a $20-billion settlement to compensate First Nations children and their families over the harms caused by chronic underfunding of child welfare on reserves.

Issues of the Pope's visit, Indigenous rights, housing and other priorities had been expected to dominate the agenda. Instead, debates over leadership stretched over most of the three-day meeting.

Archibald thanked all the delegates at the close of the assembly.

"It's so good to close this meeting as your duly elected national chief," she said.

Archibald assured the assembly the leadership debate will lead to "evolutionary, transformative" change.