(UPDATE: June 16 @ 6:28 am): Prime Minister Justin Trudeau is being allowed to check out from his quarantine hotel roughly 12 hours after checking in.

Members of his delegation to Europe who landed in Ottawa around 7 pm were tested on arrival and received negative test results the next day at about 8 am.

Those in the hotel were told to remain in their rooms, and were given lunch boxes on arrival and a boxed breakfast at their door.

Trudeau was overseas from last Thursday until Tuesday for summits with other G7, NATO and European leaders.

His office says Trudeau will follow public health rules and advice for Canadians returning from abroad during the pandemic, as will the officials and journalists who also went overseas.

The rules include quarantining for 14 days and taking another COVID−19 test about seven days after arrival.

Trudeau’s overnight stay in a hotel came after his Liberal government had spent months defending the policy of forcing most Canadians returning from international travel to quarantine in a hotel room for up to three days at their own expense.

Ottawa has said the policy, along with its slate of other border measures, has been effective at limiting COVID−19 from entering the country, even though provinces have spent most of the spring battling a variant−driven deadly third wave of the pandemic.

An expert review panel recently said the hotel−quarantine policy had no scientific basis and recommended the government scrap it. The panel noted travellers who fly to the United States and return across a land border face no such rule.

The Opposition Conservatives have slammed the fact the Ottawa hotel Trudeau stayed at isn’t one of the government−approved accommodations.

(Original story: June 16 @ 6:05 am): Canada’s prime minister has checked in at the final stop from his trip overseas.

Trudeau and the rest of the Canadian delegation who travelled to the United Kingdom and Belgium checked in at a three−star hotel near the Ottawa airport Tuesday evening to begin a 14−day quarantine.

Canada introduced a rule earlier in the year that those entering the country by air without an exemption have to stay at a government−approved hotel for up to three nights before going home to finish the rest of their quarantine.

Trudeau’s office has said the prime minister, as well as his official delegation, will follow all the same COVID−19 travel rules being asked of Canadians. 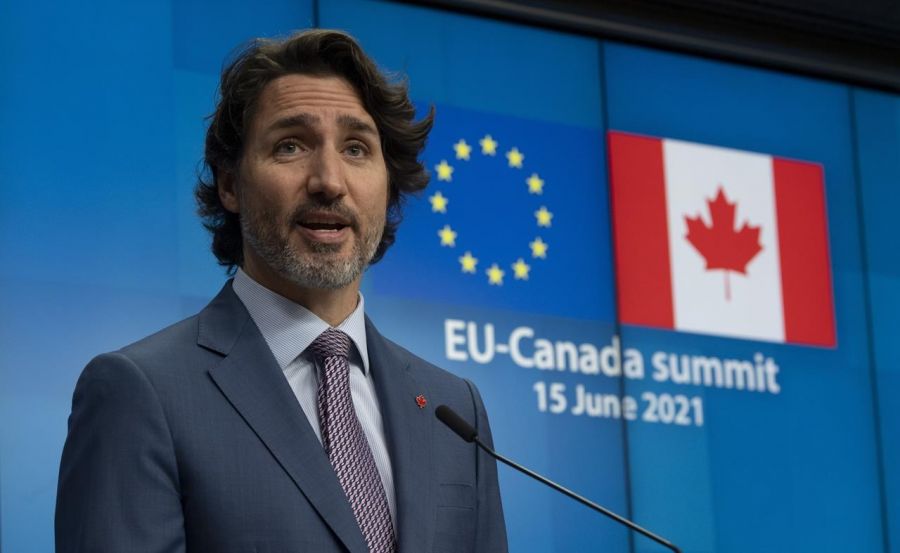 The Opposition Conservatives have railed against the fact the prime minister isn’t staying at one of the same government−authorized hotels citizens have to choose from.

Where he and the rest of the delegation were staying was quiet Tuesday evening.

Journalists and government staff were given rooms on the same floor and greeted by boxed lunches.

Those in the delegation are expected to not leave the hotel room until negative results return from a COVID−19 test that was administered when they arrived.

Trudeau and those on the trip were tested nearly ten times for COVID−19 several days before the flight left Ottawa for Europe last week.

An expert advisory panel recently told the Liberal government it should phase out the policy of forcing people to stay in quarantine hotels, because it doesn’t follow science and contains too many loopholes to be consistently followed.