(UPDATE: Dec. 10 @ 5:45 am): A Canadian man says he is still “shaky” from the experience of witnessing the beginnings of a volcanic eruption in New Zealand.

The volcano off the New Zealand coast erupted Monday with a towering blast of ash and scalding steam as dozens of tourists were exploring its moon-like surface, killing five people and leaving eight others missing and feared dead, authorities said.

Sylvain Plasse, an actor from Toronto who is aboard a Royal Caribbean cruise ship, said he saw “huge smokes and plumes that went in billowing and then slowly morphing into different shapes and then being swept away” on an island across from him about 90 kilometres away.

Plasse was witnessing the beginnings of the eruption on White Island off the New Zealand coast.

At the time, he’d been taking a walk Monday afternoon on the foothills of Mount Maunganui in New Zealand. He’d climbed the steep slopes, got a bird’s eye view of the beaches around the mountain and Tauranga, the city where his cruise ship is docked, and took lots of pictures of the “stunning” day, he said.

Plasse thought the smoke was from stacks from a factory. 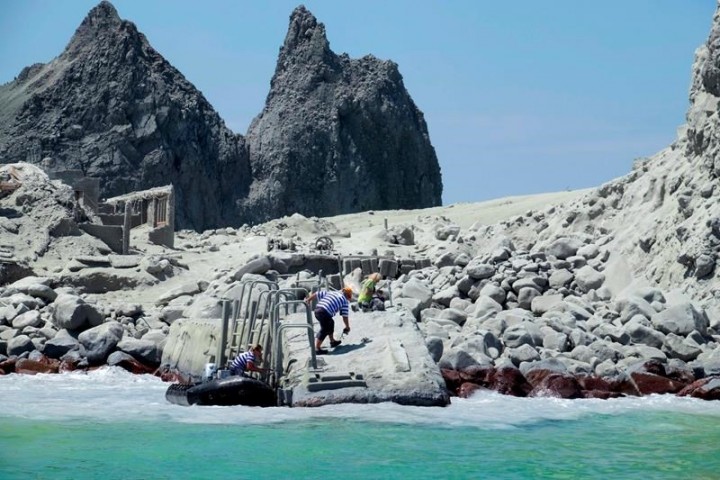 But a local jogger pointed to the smoke and said to him: “‘Wow. See. Look at that. You get to experience one of our local volcanoes erupting. It’s a special day.'”

After the eruption, helicopter crews landed on White Island despite the danger and helped evacuate many survivors, some of them suffering critical burns. But officials said Tuesday they were still working with scientific experts to determine when it would be safe to return to the island to search for the missing.

“A day which was phenomenal was made even better (by seeing an eruption) until I got back to the ship and rumours started swirling that some crew and passengers were on tour of the volcano. And that joy turned to guilt and sadness. It was horrifying. It was totally heartbreaking.”

He said the event is “still sinking in.”

The volcano erupted almost halfway through the 12-day cruise, and the captain has been giving passengers regular updates, he said.

He said that so far the captain hasn’t confirmed whether there are any injuries or deaths.

Global Affairs said in a statement the Government of Canada is closely monitoring the situation in New Zealand.

“At this time, there are no reports of any Canadian citizens being affected. Consular officials are in contact with local authorities to gather more information. We offer sincere condolences to the families and loved ones of the victims, and wish those injured a speedy recovery.”

New Zealand Prime Minister Jacinda Ardern said aircraft have flown over the island repeatedly, and “no signs of life have been seen at any point.”

Many of the 47 visitors on the island at the time of the eruption were Australian, and Ardern said New Zealanders and tourists from the United States, China, Britain and Malaysia were also affected.

Relatives of a newlywed American couple say the husband and wife were severely burned. Barbara Barham told The Washington Post that her daughter Lauren Urey, 32, and son-in-law Matthew Urey, 36, from Richmond, Virginia, were on a honeymoon trip.

Plasse said he had drinks with the couple the night before.

White Island, also known by the indigenous Maori name Whakaari, is the tip of an undersea volcano some 50 kilometres off mainland New Zealand. Scientists had noted an uptick in volcanic activity in recent weeks, and questions were being raised about why tourists were still being allowed on the island.

Ardern said White Island is a “very unpredictable volcano,” and questions about whether tourists should be visiting will have to be addressed, “but for now, we’re focused on those who are caught up in this horrific event.”

New Zealand police said Tuesday they were opening a criminal investigation into the deaths.

– With files from the Canadian Press (Hina Alam) and Associated Press

The confirmed death toll remains at five, but the number of missing has been revised to eight people.

Police said there are no signs of life around the volcano.

There are 31 people in hospital and three have been discharged.

It was feared earlier in the day that dozens of people were missing and presumed dead on the volcanic island.

(Original story: Dec. 9 @ 5:45 am): Dozens of people are presumed dead after a volcano erupted in New Zealand.

Of the 50 people thought to have been on White Island at the time of the blast, five are known to have died and 18 to have been rescued.

In an update just after midnight on Tuesday (about 3 am on Monday in BC), New Zealand police said they had been searching for survivors with aircraft.

But they explained: ”No signs of life have been seen at any point.

“Police believe that anyone who could have been taken from the island alive was rescued at the time of the evacuation.

“Based on the information we have, we do not believe there are any survivors on the island.”

There were both tourists and New Zealanders on the island – which is owned privately and allows tours – when it erupted on Monday.

White Island, also known as Whakaari, is the most active volcano in New Zealand.