The Transportation Safety Board of Canada (TSB) has finished an investigation into a helicopter crash in the Kootenays earlier this year and released the accompanying report.

The crash, involving a chopper from Kootenay Valley Helicopters, happened on March 16 while a small crew was performing avalanche control work for BC’s Ministry of Transportation.

It was the second flight of the day, taking off from a staging area near New Denver to conduct work in the nearby London Ridge avalanche area.

That work consisted of dropping strategically placed explosive charges and igniters onto the slope from a height of around 20 feet.

“En route to London Ridge, the sky was overcast with scattered clouds at and below the ridgeline with calm to light winds from the southwest,” the report explained.

“The helicopter was being operated at an altitude of about 7000 feet above sea level, approximately 100 feet below the ridgeline.”

According to the report, the pilot and two technicians on board coordinated the placement of the charges and documented whether they were successful in releasing the snowpack.

At one point, one of the technicians requested an adjustment to the initial target for the second explosive charge to be deployed, so the pilot climbed the aircraft up the slope, “nearer to the ridge and close to the base of the clouds.”

“The pilot assessed the new location and estimated that, as previously anticipated, his exit strategy to turn left and then fly downhill would be appropriate,” said the report.

The move went smoothly at first, but the pilot lost reference with the ground and flight visibility as the second explosive charge was deployed and it moved the main rotor over loose snow to create whiteout conditions.

“The high-frequency vibration rapidly worsened and the pilot performed a forced landing. At approximately 1:31 pm, the helicopter landed hard on its skids and tipped onto its right (the pilot’s) side,” the report described.

“The main rotor and blades were fractured and the tail boom was partially severed. The helicopter came to rest about 3-5 metres downslope of the second explosive charge deployed; the charge detonated approximately 2.5 minutes later, but did not trigger a release of the snowpack.” 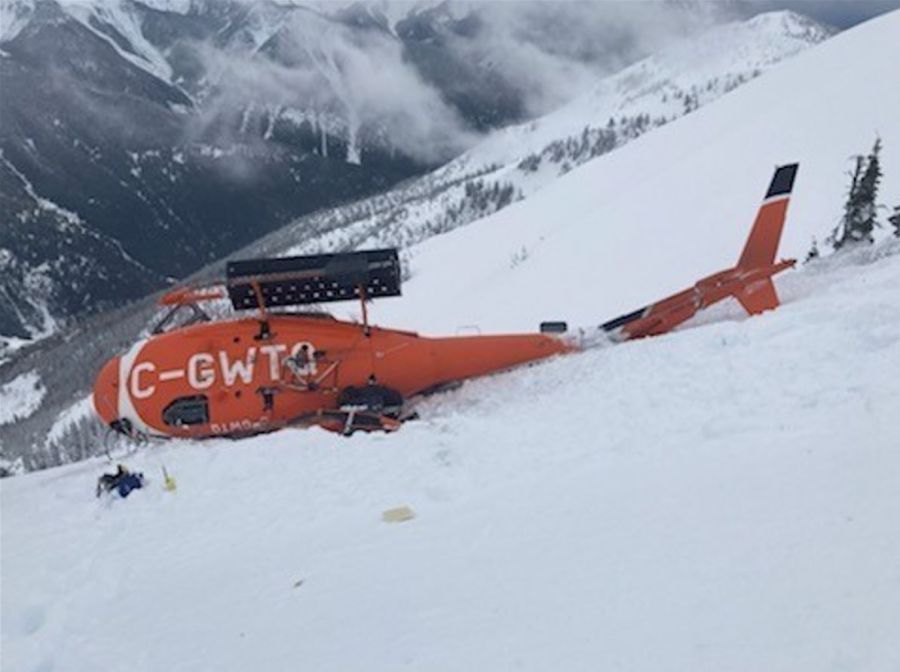 The helicopter was damaged and snow entered the cabin, while the three occupants were disoriented and shaken, but uninjured.

Although it wasn’t an easy process, the trio managed to free themselves from the grounded helicopter.

The pilot managed to remove the emergency locator transmitter (ELT) from its housing, attached the remote antenna and turned it on manually to ensure it was activated.

Their signal was received by the Canadian Mission Control Centre and relayed to the Joint Rescue Coordination Centre in Victoria.

A portable radio on board was displaced during impact, but located after a 15-minute search through the snow.

Kootenay Valley Helicopters was contacted and transportation off the mountain was coordinated, with a local helicopter being dispatched to rescue the crew.

It arrived around an hour after the crash.

While the conditions were partially to blame for the incident, Kootenay Valley Helicopters did implement a new safety policy in wake of the crash.

“Before starting the approach to a blasting site, the crew must hold a briefing to discuss the suitability of the avalanche start zone, current weather conditions, and the adequacy of visual reference for approach, deployment of the charge, and departure from the blasting site. If, during the approach phase, a new site is selected, the approach is discontinued. A thorough assessment of the new location is subsequently conducted and briefed, and a new approach is initiated.”

To view the entire report from the TSB, click this link.