(UPDATE: July 12 @ 4 pm) – Another high streamflow advisory has been downgraded in the Thompson region.

On Tuesday morning, the BC River Forecast Centre removed the high streamflow advisory for the North Thompson River including tributaries near Barriere, Clearwater and Blue River. 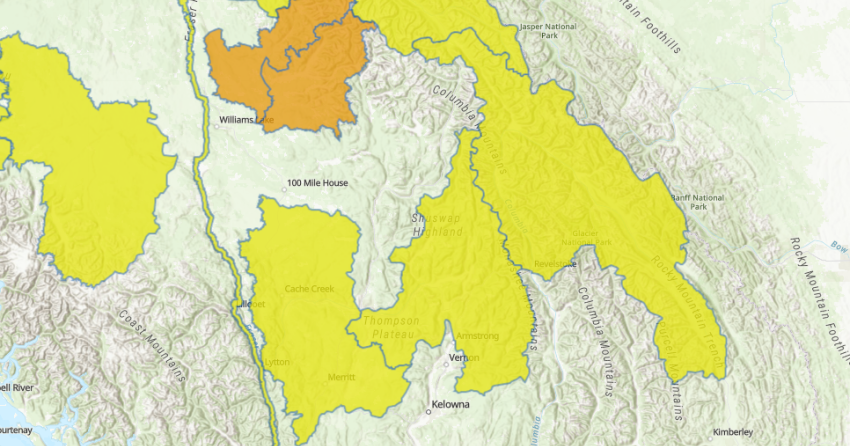 The centre says the North Thompson has dropped to 1,620 m3/s while the South Thompson is currently sitting at 1,180 m3/s. Both rivers are forecast to recede.

The flows downstream in the Thompson River at Spences Bridge has dropped but remain at 2,870 m3/s.

The centre adds that current weather models predict dried conditions for the upcoming week and water levels are expected to continue on the downward trend.

Rivers are still vulnerable to any rainfall and residents should continue to use caution around unstable riverbanks and fast-flowing water.

(UPDATE: July 9 @ 9:15 am) – The BC River Forecast Centre has downgraded a number of advisories for the Thompson region.

On Friday, the centre downgraded the South Thompson River, including Shuswap Lake, to a high streamflow advisory.

The same advisory is being maintained for the North Thompson and Thompson River between Kamloops and Spences Bridge, however.

The Nicola River was moved to all clear.

A bit further north, the Quesnel River was downgraded to a flood watch. 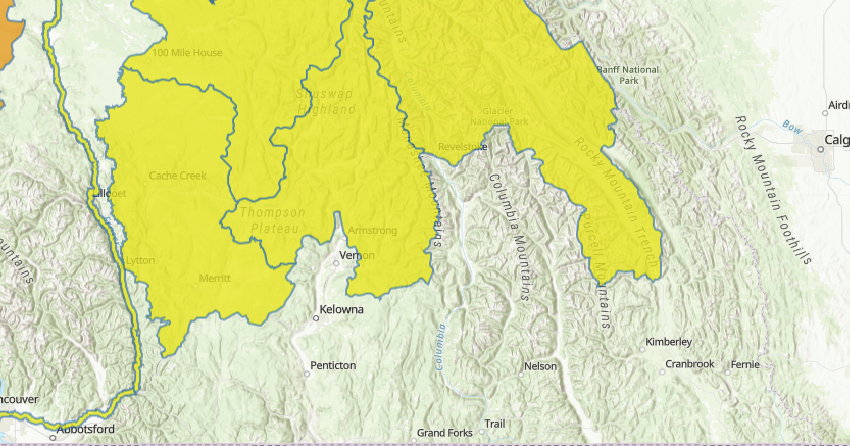 The BCRFC says rivers in the central interior remain relatively high for this time of year due to the decreased snowmelt and the recent rain events.

“In general, river systems in the Central Interior are beginning to slowly recede or have been steadily receding over the past week,” explains the BCRFC.

“Current weather models predict drier conditions for the upcoming week and water levels are expected to continue the downward trend.”

Since the water levels remain high, all rivers and lakes remain vulnerable to any potential heavy rainfall events over the coming weeks.

The public is advised to avoid any fast-flowing or potentially unstable riverbanks during this time.

(UPDATE: July 6 @ 4 pm) – After a week and a half, a flood watch for the Thompson River between Kamloops and Spences Bridge has been downgraded.

The BC River Forecast Centre downgraded the warning to a high streamflow advisory at 1:15 pm on July 6.

“The Thompson River from Kamloops to Spences Bridge has been steadily receding towards a two-year return period flow,” explains the BCRFC. 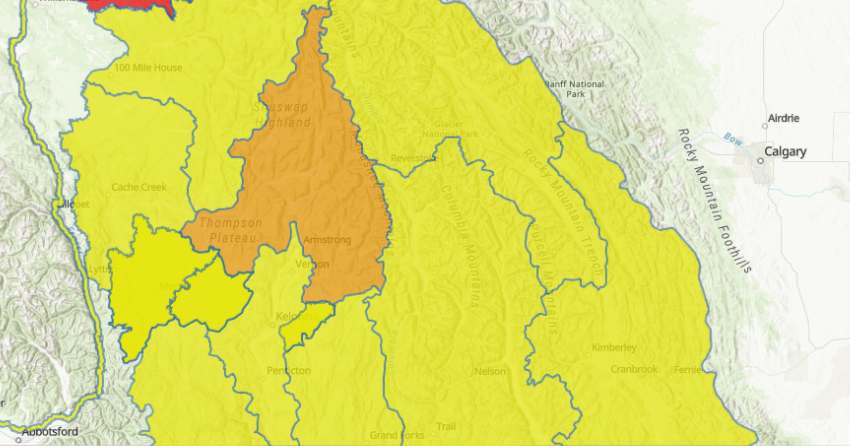 However, a flood watch issued on June 27 for the South Thompson River, including the Shuswap Lake, is being maintained.

A high streamflow advisory also remains in place for the North Thompson River, including tributaries around Barriere, Clearwater and Blue River, as well as the Nicola River.

The Quesnel River remains under a flood warning.

“Rivers in the Central Interior remain relatively high for this time of year due to delayed seasonal snowmelt and additional contribution from ongoing precipitation events,” explain the BCRFC.

The agency says Environment Canada currently has an “orange weather notification” for potential heavy showers that are expected to affect the Cariboo region on July 7 and July 8.

This raises the concern for rivers in the Cariboo. The most northerly section of the North Thompson, mainly Blue River, could see some of those heavy showers as well.

(Original Story: June 27 @ 11:48 am) – On Sunday, the BC River Forecast Centre (BCRFC) downgraded a high streamflow advisory for the North Thompson.

Unfortunately, a flood watch for the Thompson River between Kamloops and Spences Bridge, Shuswap region and South Thompson River is being maintained.

A high streamflow advisory is being maintained for the Nicola River as of 11:30 am on June 26. 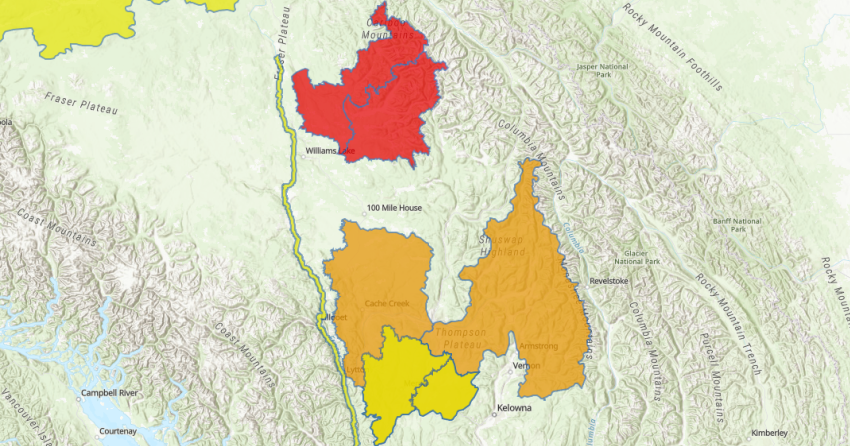 “Rivers have peaked from rainfall earlier in the week,” explains the BCRFC.

“Snowmelt flood risks may be subsiding as snow coverage across watersheds has become diminished.”

While rivers remain full and at capacity, they will continue to remain vulnerable to additional runoff, particularly from rainfall at higher elevations.

The BCRFC is forecasting an unsettled weather pattern to begin after the hot weekend. This weather could bring more rain to these locations beginning on Tuesday.

A flood warning for the Quesnel River is also being maintained.

However, a flood watch has been removed for other tributaries in the Cariboo Mountains west of Quesnel.

Sun
34℃
Make Homepage Advertise with Us