A 35-year-old Kamloops man has been charged following the alleged theft of diesel from a maintenance yard earlier this month.

The Logan Lake RCMP responded to the alleged theft that was taking place off Hwy 97D. An employee of the highway maintenance company said a crew member observed a man syphoning diesel from one of their loader trucks.

According to a police report, the crew member tried to use his plow truck to block the man from leaving the yard, however, in an attempt to flee, the driver rammed the plow truck.

The police say the driver then tried to drive over a snow bank but became stuck in the process.

As the driver tried to escape, the truck caught in fire and became fully engulfed in flames.

The driver and female passengers escaped unharmed and began to walk away in an attempt to evade police officers who had arrived at the scene by this time. 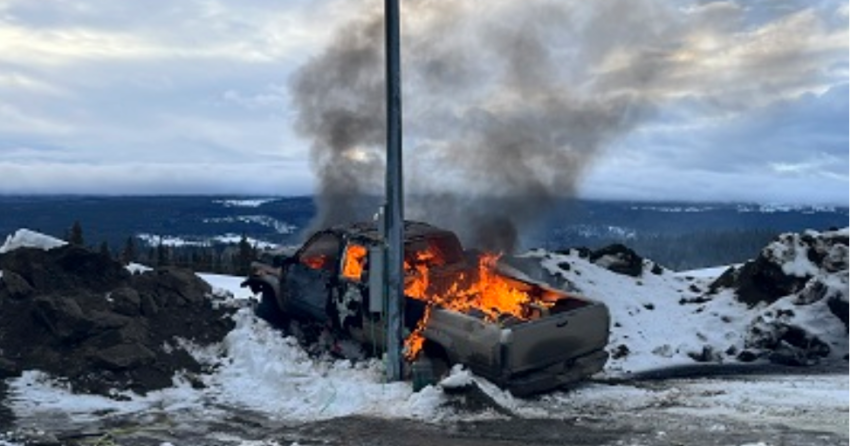 Both people were arrested without incident.

“It was the quick thinking of the maintenance crew operator to block the truck that led to the suspect being captured,” states Cpl. Duncan.

“The investigation is ongoing and police suspect the truck was stolen out of Kamloops.”

The female passenger was not charged, however, Sean Nicolson, 35, has been charged with theft under $5,000, operation of a vehicle while prohibited, failure to comply with undertaking and breach of a probation order.

Nicholson remains in custody and has a court date on Jan. 26.

Charges related to the stolen vehicle have not yet been forwarded to Crown counsel.