Concern for BC sockeye salmon as return estimates drop by millions

Optimism over an expected bumper season for wild British Columbia sockeye salmon has turned to distress, after a regulatory body's estimate of returns to the Fraser River dropped by nearly half this week.

Hopes were high for the sockeye run this year in part because the fish return to spawn in the Fraser River on a four-year cycle, with 2022 being one of the expected peak years, he said.

The low figure raises conservation concerns and suggests the sockeye fishery in BC waters is unlikely to open this year, creating what a commercial fishers' union says are dire circumstances for its members. 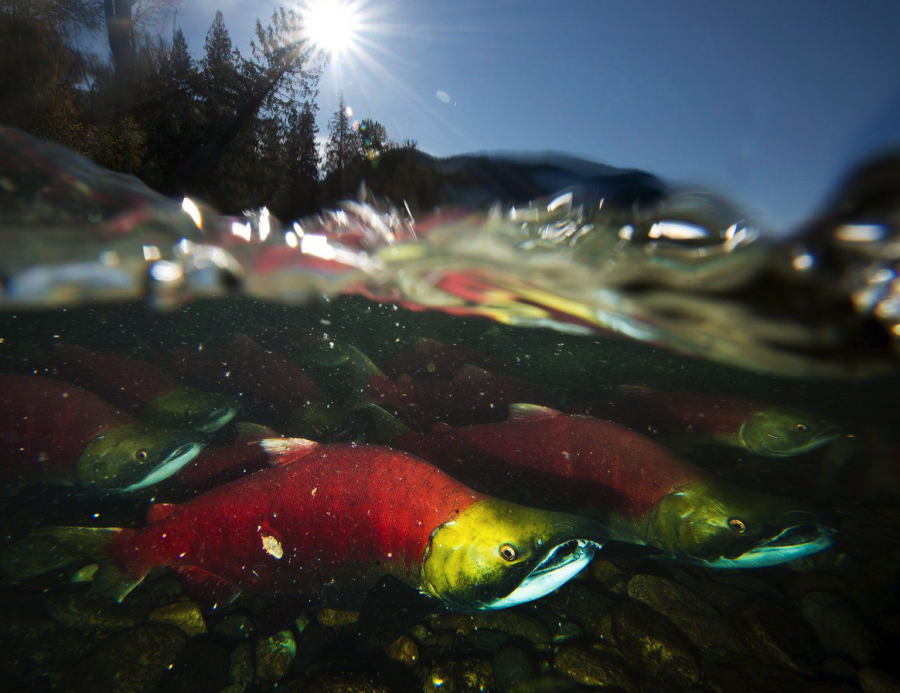 It came days after a less-conservative estimate sparked tension between US and Canadian officials.

The commission, which was created jointly by the United States and Canada to manage Pacific salmon stocks, estimated last Thursday that the run would be 7.2 million before dropping that figure further.

While the US accepted the commission's assessment last week and allowed its sockeye fisheries to open over the weekend, Canada's Fisheries Department urged a more conservative count and Canadian fisheries remained closed.

"The United States agreed with our recommendations last week and Canada wanted to see a number even lower than what was recommended," said Fiona Martens, the commission's chief of fisheries management programs.

Martens said the commission makes its best guesses based on test fisheries and models. The number of fish returning was still trending upward on Thursday, but had not yet peaked, she said.

"In order for us to come up with the best run size, we need to see a peak in that data. We weren't seeing that last week, so there was definitely some uncertainty," Martens said.

The US fisheries have since been closed, she said.

Fisheries Minister Joyce Murray was not available for an interview and the Washington state Department of Fish and Wildlife did not return a request for comment.

Kevin Lemkay, a spokesman for Murray, said the government is following the panel's decision "with great concern" for both wild salmon and Canadian harvesters.

"DFO was clear during negotiations that it believed (the commission's) run size estimates were far too high and were extremely disappointed to see fisheries proposals allowed based on overly optimistic estimates of run sizes," Lemkay said in a statement.

While Canada is happy the commission has since adopted a more "precautionary approach," he said the government is equally disappointed that sockeye runs are proving weaker than expected.

Fishers expressed dismay at both the missed opportunity to fish and the lack of support they felt from government. For Kyle Louis, who fishes out of Steveston, BC, learning that his US counterparts were hitting the water while he was forced to dock was heartbreaking.

James Lawson, president of the United Fishermen and Allied Workers Union-UNIFOR, said some commercial fishers went out to sea thinking they would be fishing and can't afford to make it home with no catch.

The federal government isn't offering enough transition support to fishers as the industry crumbles around them, he said. Employment insurance is inaccessible when tied to income that doesn't exist and licence fees should be reduced for financial relief, he said.

"They should be seeking a labour force adjustment for us, maybe some disaster relief," he said, noting fishing has been limited for years.

The union believes in acting upon the best available science and it agrees with the commission's estimates, including Thursday's, which provided for temporary harvesting, he said. Now that he peak has passed, the brief chance to fish is gone.

"What little opportunity there was, the Americans took effectively, leaving us out of the water. They beat us to the punch while our government kept us tied to the dock," he said.

Lemkay said the impact to harvesters is not lost on the minister. The government is developing a licence buyback program with input from licence holders through the $647-million Pacific Salmon Strategy Initiative. Supports will also be offered to dispose of vessels and non-selective fishing gear, he said.

The small Fraser runs are a concerning anomaly that may point to the impact of human activity, according to Taylor.

Notably, sockeye returns to other parts of the North Pacific, from Russia to the Columbia River, have been strong, he said. They include British Columbia's Skeena River and Barclay Sound.

The weakest Fraser returns are in the southern and eastern parts of the watershed where humans have altered the landscape, he said. Poor runs this year include the famed Adams Rivers run and others in the Kamloops and Shuswap areas.

"That raises a few questions. You know, that's where a lot of the population lives, that's where we humans have really manipulated the habitat," he said, adding that climate change is also contributing to warming waters, wildfires and other negative local impacts.

Declines of Fraser River sockeye may be canaries in the coal mine, potentially reflecting the health of the Salish Sea and land around it, he added.

"I hate to use that tired old metaphor, but they truly are," he said.

The numbers should send warning signals to all British Columbians for a need to reform logging practices and protect and rehabilitate habitat, he said.

"The future does not look good for poor salmon unless we do that."