The Williams Lake RCMP is expressing its heartfelt thanks to a group of grade 11 students for their efforts to prevent the spread of a brush fire.

Officers were notified about the potential wildfire in the wooded area behind 1400 Broadway Ave S.

After spotting the smoke billowing from the hillside, members of the Williams Lake RCMP grabbed fire extinguishers and started to climb towards the smoke.

When they arrived, they saw “several trees and parts of the ground on fire,” along with the group of teens from Williams Lake Secondary.

According to the RCMP, the six boys also noticed the fire and smoke while on a hike and quickly sprung into action to help. 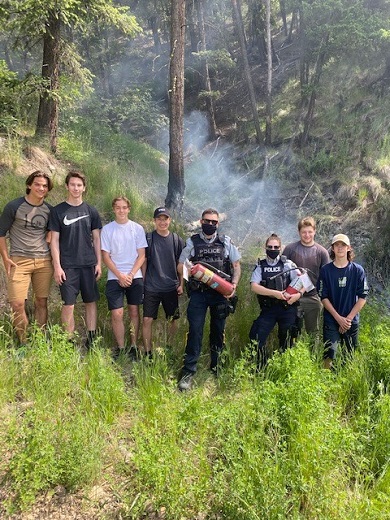 They used the water they were carrying for that hike to try and prevent the spread of flames until firefighters from the Cariboo Fire Centre could arrive on scene.

The fire was snuffed out and the Williams Lake RCMP has since identified the heroic teens as Ethan Reid, Brenden Higginson, Ty Oviatt, Kaleb Alphonse, Nathan Kendrick and Landon Brink.

Sun
22℃
Make Homepage Advertise with Us