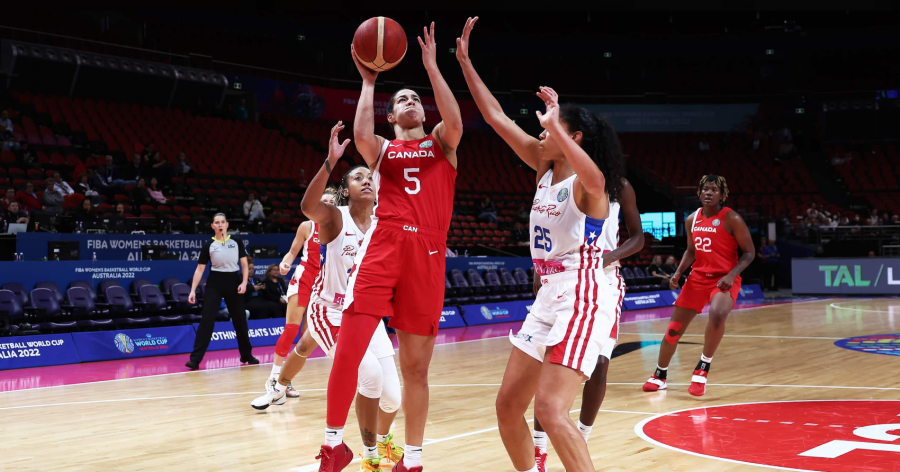 Canada was entering the playoffs with a 4-1 record, losing only to Australia.

They faced off against Puerto Rico (2-3) who has just player on the roster with WNBA experience, Arella Guirantes.

From the opening tip, Canada controlled the game, jumping out to a quick 14-4 lead that ballooned to 26-11 by the end of the frame.

At halftime, Canada led 44-23 and their double-digit cushion was set until the dying seconds of the fourth, as the final score was 79-60 for Canada.

Puerto Rico was led by the feisty Guirantes, who had 19 points, but the Canadian team showcased their depth in having virtually their entire starting lineup into double figures.

Kia Nurse led the way with 17, while Chatham, Ontario's Bridget Carleton chipped in with 15. The Minnesota Lynx forward is coming off an electric performance over Mali in the final group stage game, where she poured in seven threes for 27 points.

Shay Colley (11 points), Natalie Achonwa (12 points) and Laeticia Amihere (12 points) all chipped in offensively, while Kayla Alexander was strong with a game-high 13 rebounds.

Now, Canada will face the juggernaut USA in the semifinals. The US team is led by recent WNBA champions Kelsey Plum and A'ja Wilson and have outscored their opponents by more than 200 points throughout six games. They handily beat Serbia in their quarter-final match 88-55.

The last time Canada won a medal at the World Cup was way back in 1986, but they will have a good chance at claiming one even if they lose to the US.

The other semifinal is between China and Australia. In group play, Canada lost a tight 75-72 game to Australia, but has not played China yet.

Both semifinal matchups will be broadcasted on Sportsnet late tonight, with Canada's match beginning around midnight.

For more information on the tournament, please click here.