UPDATE: Alerts in place for Hwy 3, Hwy 5 and Hwy 97C due to snowfall

(UPDATE: Nov. 29 @ 4:15 pm) - Environment Canada has issued another weather alert for a BC Interior highway.

Hwy 3 has been added to the list, as the agency is calling for 15-25 centimetres of snow between Hope and Princeton. As a result, a snowfall warning has been issued.

Winter storm warnings were issued for the Coquihalla (Hwy 5) and Connector (Hwy 97C) early this morning, with 20-35 cm of snow expected to fall starting this evening.

Check DriveBC for all the latest information on highway conditions and closures.

(Original story: Nov. 29 @ 5:40 am) - A winter storm warning has been issued for two crucial BC Interior highways.

Environment Canada said between 20 and 35 centimetres of snow are expected to accumulate along the Coquihalla (Hope to Merritt) and Okanagan Connector by Wednesday morning.

Reduced visibility is also forecast due to blowing snow. 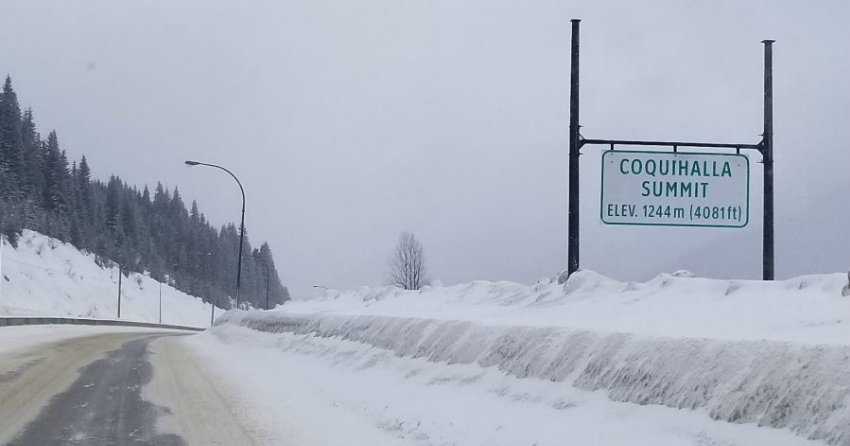 “Wind gusts up to 60 km/h on the Okanagan Connector will give reduced visibility in blowing snow.

“Rapidly accumulating snow could make travel difficult over some locations. Visibility will be suddenly reduced to near zero at times in heavy snow and blowing snow.”

In the west, meanwhile, Environment Canada is warning of a “major winter storm.”

It said Squamish, Whistler and nearby settlements could see up to 40 cm of snow along with 90 km/hr winds.