Part of the Coquihalla Highway is simply gone

An atmospheric river that pounded the southwest corner of British Columbia over the latter half of the weekend has done some serious damage to the Coquihalla Highway (Hwy 5).

It’s one of many highways connecting the Lower Mainland to the BC Interior that is currently closed and there’s a good chance it will be shut down the longest.

That’s because a small section of the highway, southbound near Othello Tunnels, has washed away and is simply gone. 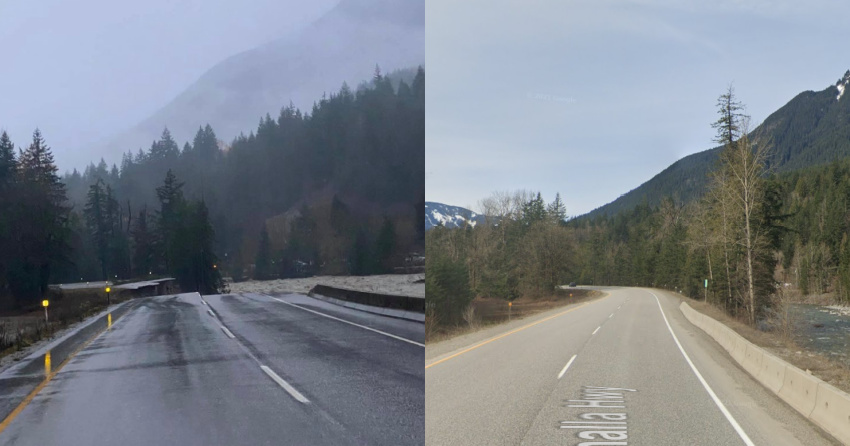 Tyler Brown shared an image of the washout on Twitter, which shows the severity of the issue.

When asked about it during a press conference this morning, Minister of Public Safety Mike Farnworth said officials “are not able to give an update” on the status of Hwy 5.

He did say that they hope Hwy 1 will reopen around 5 pm today, but Farnworth and company were unable to give precise times for other highways.

A look at the mudslide impacts on #BCHwy5 at Mine Creek Road.
Crews are on site and assessing. Please check @DriveBC for the latest information. https://t.co/nudJbIIAgX#BCstorm #Coquihalla #Merritt pic.twitter.com/7ajcUMGPGM

According to Environment Canada, around 225 millimetres of rain fell around Hope, the closest community to the Hwy 5 washout, since the storm began on Saturday.

The nearby District of Kent has issued a local state of emergency after landslides severed Hwy 7, which has resulted in 80-100 vehicles being trapped on the road.

The effects of the storm have been felt as far east as Merritt, where nearly 2,000 people have been evacuated due to the Coldwater River bursting its banks.

Video from the doorbell cam - we have one more step before the house is in trouble #MerrittBC #BCFlood #BCStorm pic.twitter.com/GCWTbW1vJK

Residents who remain at home have been told to stop using running water after the wastewater treatment plant failed.

The rain pounding the coast is expected to ease up later today, but forecasters warn of powerful winds over Victoria, Metro Vancouver and the Fraser Canyon this evening.